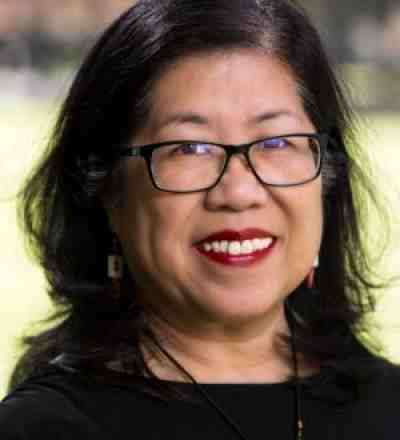 Riverside
University Programs Teaching Librarian
judy.lee@ucr.edu
When did you start in your current position?:
Sep 27, 2017
Years in LAUC:
over 35

I liked working in the library when I was a student in college. At the time, librarianship seemed like a good home base regardless of one’s subject background or various life experiences. It also seemed like a profession that could accommodate whatever experience or knowledge one had accumulated. Because of that perception, I liked to think there would likely be a place for nearly “everyone” to work in the library.

Describe the first time you worked in a library.

W/o pay: I was an 8th grade student aide to the middle school teacher who “ran” the school’s library. That year we all had to prepare an occupation report on what we would like to pursue for a career. (No, I did not write one on libraries and librarianship. I got sidetracked. Mine was on becoming, of all things, a nuclear physicist!)

W/pay: I was a student assistant at Shields Library at UC Davis (!) first in Reserves, then also in Circulation, and worked as a substitute library aide at the Yolo County Library, Davis branch (where I met the mother of someone who would later become a University Librarian at another UC campus). I switched my major from Biological Sciences to Applied Behavioral Sciences and focused on libraries. As part of my (mostly self-identified) major, I arranged for internships with the Shields Library Reference Department, the Davis branch of the Yolo County Library, and the California State Library. My senior project was to create a user’s guide to a non-affiliated departmental library on campus (community development). I enjoyed working in an academic environment, although one of my mentors thought I might be a good fit for a special library.

What is your current or recent role in LAUC, either locally or systemwide?:

Currently, I am on the LAUC-R Programs Committee and recently served on both the Programs and Diversity Committees (convenient for joint programs). I was the alternate delegate from Riverside and was able to represent Riverside during LAUC’s 50th anniversary (at UC Irvine). In the most recent LAUC-R election, I was selected as our Alternate Delegate for 2019-2020.

What do you like best about being a UC librarian?

Working on a UC campus, being part of a system of UC campuses, and the variety and quality of my UC colleagues, and their willingness to share! I am always impressed by the depth and breadth of their professionalism and their individual generosity.

Describe a recent or current project on which you are working.

One of the populations I work with now is the Honors Program. They have a course called “Individual Projects in Research or Creativity,” which is a 2-unit course to be taken the year before their senior year (with emphasis on their capstone projects). This course is undergoing a makeover with the following changes: requiring it to be taken earlier in the “junior year” (Fall or Winter Quarters instead of Spring), changing credit from 2- to 4-units, changing the format from face-to-face to a hybrid course (combination of face-to-face and online modules), and including library instruction as part of the course (with the 2-unit format, an instruction session in the library was optional and not all of the honors faculty requested one). The format change is in support of the recommendations from the 2018 Final Report of the Provost’s Task Force for Hybrid and Online Education. I am open to the experiences and suggestions of my colleagues and would welcome advice! Do contact me. (June 2019)

Describe your recent professional work outside of work, such as association work, writing, research, or anything else.

Writing for publication was something I had shied away from in my career. Recently, a chapter I co-authored with former UCR colleague Melissa Cardenas-Dow (now at CSU-Sacramento) was accepted for publication in Librarians with Spines, vol. 2, tentatively titled “Consciousness is Power: Working to Center Academic Library Outreach in the Service of Social Justice, Asian and Pacific Islander American Ethnic Visibility, and Coalition-Building” (forthcoming 2019). The work grew out of conversations and observations Melissa and I exchanged when we traded shifts at the reference desk, and which continued over time even as we no longer worked at the same institution.

I think some of my most impactful professional association work was the time I spent in CCLI-South and, as an officer, helped its transition into the successful CARL interest group SCIL during that formative phase, and the ensuing time I spent on the CARL Executive Board. (I gave SCIL its gavel when I left my SCIL office. I liked the tradition we had at LAUC-R and thought it would be nice for SCIL, so provided one to SCIL for “passing it on” to each successive Chair.)

Over the years I have been involved in a variety of work concerning diversity and inclusion, from earlier in my career working with UCR committees on affirmative action, the status of women, and Asian and Pacific Islander Affairs to the last decade working in the Riverside community. This later work involved cultural programing and APIA historic preservation issues, including grassroots work to save a Riverside National Register of Historic Places site from development destruction (Riverside’s historic Chinatown archaeological site as a founding member of the Save Our Chinatown Committee), to working with the Multicultural Council for the local Riverside museum, to my latest endeavor having been appointed to a 501(c)3 foundation board to save the Harada House, one of two National Historic Landmarks in Riverside. Prior to its donation to the city, this house was home to a Japanese American family involved in a significant California state court case on citizenship and property ownership in the early 20th century (Alien Land Law) and played an important role during Riverside’s chapter of the Japanese American internment and the resettlement of the area’s returning internees. Many of these associations were personally realized and came together in the Riverside Asian American Walking Tours (RAAW Tours), of which I am a founding organizer and tour docent.

What would you like the next big thing in libraries to be?

The rediscovery and widespread recognition of the importance of the human connection and its basis for innovations in the library. The people behind and within the library make it work for patrons; they drive the organization’s success.

If I had to describe the librarian/library experience into one word, it would be “relationships” – the relationships the librarian has with patrons, with professionals and co-workers, with disciplines and sub-disciplines and the nature of the work (be they within librarianship/information science such as instruction and literacy or the subject disciplines one might be responsible for or have direct connection to such as Asian American Studies for collection development or writing fiction), or within the larger structure related to the library (e.g., the University, local library board, a government agency, community organizations, the publishing world, etc.).

Complete this statement: "One surprising fact about me is...”

…that I was an athlete in middle school. I competed on my school’s track and field team (more successfully in track than field). I ran the shorter sprints and participated on the girls’ relay team.

(Surprise, UCR colleague Carla – I, too, watched and loved Are You Being Served? – that British comedy that took place inside the Grace Brothers department store. “Are you free?” “Yes, I’m free.”)

One of my favorites to re-read periodically, has been the Hobbit and Lord of the Ring series, although I have to admit that later on I started skipping the chapters that took place in Mordor and still yearn for more female characters, including number, variety, and greater levels of activity.

Another fantasy novel series I would recommend is referred to as the Books of Pellinor, or the Pellinor series, by Australian author Alison Croggon. Four novels make up the series (published 2003-2009) with a prequel published in 2016. (The Gift – aka The Naming -, The Riddle, The Crow, and The Song make up the series. The prequel is The Bone Queen.) The series is populated by variety of characters. I like how it centers on the adolescent female lead Maerad, who turns out to be a hidden and untrained, yet gifted Bard and the foretold “chosen one.” Her coming of age story mirrors the growth and development of her character as she rises to challenges. There is good and evil and a quest for knowledge in dangerous and treacherous times. Purported to be a retelling of “The Naraudh Lar-Chanë,” or, “The Riddle of the Tree Song,” the series recalls Tolkien’s creation of another world with its own cultures, languages, ways of life, and the results and impacts of one’s choices.